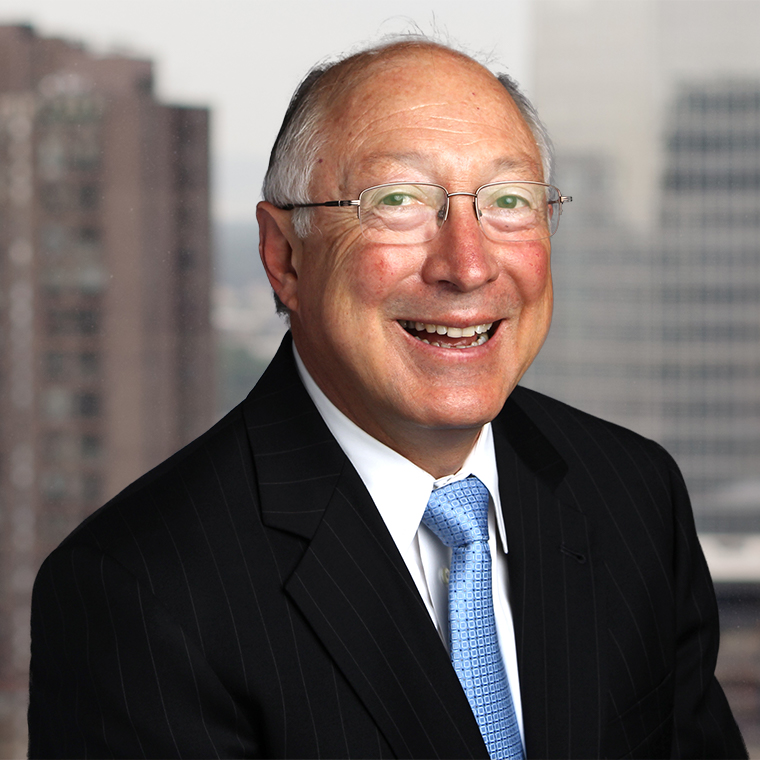 In December 2008, President Barack Obama selected Mr. Salazar to serve in his cabinet as Secretary of Interior. Mr. Salazar was confirmed as the 50th Secretary of the Interior by a unanimous US Senate vote on January 20, 2009. Prior to his confirmation, Mr. Salazar served as US Senator for Colorado and served on the Energy and Natural Resources and Finance Committees, which oversaw the nation's energy, natural resources, tax, trade, social security and healthcare systems. He also served on the Agriculture, Ethics, Veterans Affairs and Aging Committees.

As Secretary, Mr. Salazar led the nation's efforts to develop and implement the framework for America's energy independence. The effort included overseeing the exploration and development of conventional and renewable energy resources on public lands and oceans, working on matters relating to climate change, leading the successful response to the 2010 Gulf of Mexico oil spill, and overhauling the regulatory oversight of oil and gas exploration and production.

As Secretary, he led the effort to permit more than 11,000 MW of renewable energy on public lands from solar, wind and geothermal sources (the equivalent of power from more than 30 regular power plants) and developed the blueprint for future siting and development of these resources, including high-priority transmission infrastructure projects. As part of his renewable energy efforts, he also created the first offshore wind energy plan for the Atlantic Ocean and awarded the first leases in American history for offshore wind projects. During his service, he also led the creation of regional climate change centers in the United States.

Mr. Salazar led the President's initiatives in creating a new chapter with Native American tribes and Alaska Natives. This effort included the resolution of longstanding conflicts like the Cobell litigation, water rights cases, and permitting energy and solar projects in Indian country.

As Secretary, Mr. Salazar appeared before Committees of the United States Congress and provided testimony at more than 30 hearings.

As a US Senator, Senator Salazar sponsored and led efforts for the enactment of the 2005 Energy Policy Act, the 2006 Gulf of Mexico Security Act, the 2007 Farm Bill, and the 2007 Energy Independence and Security Act. In each of these efforts, Mr. Salazar was a central player in putting together the successful bipartisan efforts that created the most significant energy legal framework in US history. Senator Salazar was also a key architect of the 2009 Omnibus Public Lands Law, which was the most significant conservation measure enacted into law in 50 years. As a member of the Veterans Affairs Committee, Mr. Salazar was a champion for veterans and created the Office of Rural Veterans Affairs and helped lead the efforts on the new Rocky Mountain Regional VA hospital.

Mr. Salazar also helped lead a bipartisan group of senators on comprehensive immigration reform, bipartisan legislation to end the War in Iraq and healthcare reform. As a member of the Ethics Committee, Mr. Salazar was involved in reviewing and resolving ethics matters related to other United States Senators.

As Attorney General, Mr. Salazar served as the top legal officer for the State of Colorado and oversaw thousands of civil and criminal legal matters and investigations before state and federal courts, including the State Supreme Court and the US Supreme Court. Mr. Salazar also exercised the exclusive authority to convene and present matters before the State Grand Jury.

Some of the notable matters investigated and reported on included sexual assault allegations against the University of Colorado football program, the homicide of a Native American man in southwestern Colorado, the Jon Benet Ramsey homicide, and the review of numerous law enforcement matters relating to the Columbine High School killings. Mr. Salazar also led many investigations relating to securities fraud and consumer protection, including multistate securities fraud and consumer protection matters.

Mr. Salazar also led the resolution of some of the most complex natural resource and environmental conflicts in Colorado history, including longstanding natural resource damage cases at places like the Summitville mine and other CERCLA cases that had been filed some 25 years earlier. As Attorney General, he was involved in several complex interstate water disputes in the US Supreme Court.

From 1987 to 1994, Mr. Salazar served as Chief Legal Counsel to the Governor and then as Executive Director of the Department of Natural Resources for the Governor of Colorado.

As Executive Director of the Department of Natural Resources, Mr. Salazar spearheaded efforts on oil and gas, mineral, water, and conservation matters for the State of Colorado. During that time, he authored the Great Outdoors Colorado Trust Fund initiative, which is one of the premier land conservation efforts in America.

With lawyers across the United States and in key international locations, our team handles high-stakes matters before the regulatory and enforcement agencies with energy and environmental oversight.
With experience from the nation’s largest environmental cases, we guide clients through the life cycle of environment, health and safety, energy, climate change, and natural resources challenges.
When legal, public policy and media challenges converge and an institution's reputation and business are at stake, no firm rivals WilmerHale’s ability to navigate fast-moving events and craft lasting solutions.
A premier public policy, legislative affairs and regulatory team that develops and implements effective strategies, delivers measurable outcomes, and offers a deep understanding of policy and politics.
Investigations, litigation and enforcement actions launched by state attorneys general are becoming increasingly commonplace, and present unique challenges that require a specific skillset to address.
Providing sophisticated counsel on complex regulatory issues and high-stakes litigation while leveraging the experience of some of the nation’s best strategic counselors and advocates focused on tribal issues.

View all of Ken's insights & news