A global team handling highly complex and sensitive matters in all aspects of litigation.
WilmerHale offers one of the world’s premier international arbitration and dispute resolution practices.
Focusing on complex, challenging issues at the intersection of business, law, and policy.

Wilmer Cutler Pickering Hale and Dorr LLP and the Centre for Small States, Queen Mary University of London, held a seminar on 16 March in Brussels on promoting and encouraging trade and commerce in the Pacific region. Gary Born, Chair of the International Arbitration Practice Group at Wilmer Cutler Pickering Hale and Dorr, and Dr. Petra Butler, Co-Director of the Centre for Small States and Professor at Victoria University of Wellington, discussed the importance of an effective, efficient and expert dispute resolution mechanism for Pacific Island countries to foster and enhance cross-border trade and commerce. The focus was in particular on the role international arbitration can play to achieve the Pacific Island countries' goal of increased participation in global trade. Diplomatic representatives from a number of Pacific nations and delegates from other institutions with interests in the region attended.

Mr. Born addressed the audience with an overview and history of international arbitration, details of ongoing reform and capacity-building in the Pacific region and an assessment of likely future development regarding the adoption of arbitration legislation by Pacific Island States. Professor Butler's presentation concentrated on law reform and outlined the challenges of international arbitration law reform in the Pacific Island countries due to the Islands' pluralistic legal systems and the role of custom. She discussed how those challenges could be overcome. Ana Tuiketei, a Fijian barrister and Visiting Foreign Lawyer at Wilmer Cutler Pickering Hale and Dorr, chaired the discussion.

Following on from the Brussels seminar and the Fiji conference, the particular role international arbitration can play in environment and climate change disputes will be explored at a conference jointly held by Wilmer Cutler Pickering Hale and Dorr LLP and the Centre for Small States on 6 and 7 September this year in London. 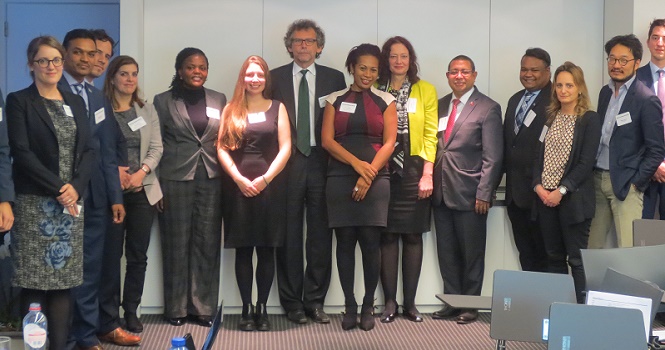