FERC in the Biden Era

FERC in the Biden Era

Clients rely on our team of experienced regulatory litigators and former government officials to handle all aspects of administrative law litigation.
With lawyers across the United States and in key international locations, our team handles high-stakes matters before the regulatory and enforcement agencies with energy and environmental oversight.
A global team handling highly complex and sensitive matters in all aspects of litigation.

The Federal Energy Regulatory Commission (FERC or the Commission) is poised to play an important role in the administration of President-elect Joe Biden, in light of the emphasis that the Biden administration will likely place on climate change issues.

Several developments raised the profile of FERC in 2020, with significant implications for the energy sector. First, the makeup of the Commission remained in flux – only just returning to a full complement of five commissioners on November 30. Second, incentives for renewable energy projects have been scrutinized by the Commission, causing stakeholders to pursue various strategies, including litigation. These are likely to be reexamined during the Biden administration. Third, FERC’s enforcement activity dropped significantly, a trend that is unlikely to continue. And finally, the potential role of FERC in addressing climate change issues is likely to expand during the Biden era.

President-elect Biden will have the ability to name a new Chair of the Commission once inaugurated. The current Chairman is James Danly, a Republican, who replaced fellow Republican Neil Chatterjee on November 5. Although no official reason was given for the replacement, reports suggest that the Trump administration disapproved of two recent decisions by FERC on climate-related questions, which Chatterjee supported but from which Danly dissented. Once he takes office, President-elect Biden is expected to name a Democratic commissioner to serve as the Chair.

Confirmation of both nominees enshrines a 3-2 Republican majority at FERC until at least next June, when an additional vacancy opens. (By statute, there can be no more than three commissioners from either political party at a given time.) That partisan breakdown could be significant as some areas within FERC’s jurisdiction—such as approvals for oil and gas infrastructure and changes to the minimum offer price rule (discussed below)—increasingly result in split decisions on party lines.

PJM's “minimum offer price rule” (MOPR) continued to be a source of considerable attention at FERC in 2020. At issue is whether state-subsidized clean energy projects should be allowed to participate in PJM’s capacity auction without being subject to price floors. Traditional energy sources have been concerned that such state subsidies (or “out-of-market support”) suppress capacity prices. In a December 2019 order, FERC agreed and directed PJM to expand its MOPR. That caused states to assert that requiring clean energy resources to forego state subsidies will frustrate their clean energy goals.

PJM’s capacity auction for 2022/23 has been on hold pending the resolution of this issue. Therefore, amidst a series of FERC rehearing orders, PJM submitted compliance filings and on October 15, FERC issued an order largely accepting the approach proposed in PJM’s filings. 173 F.E.R.C. ¶ 61,061. In a scathing dissent, Commissioner Richard Glick called the proceeding “one of the Commission's all-time worst” which “will ultimately be remembered as a model case of egregious Commission overreach.” Id. Not surprisingly, a number of petitions for review have been filed in response to FERC’s orders in this proceeding. See Illinois Commerce Commission v. FERC, Case 20-1645 (7th Cir.) (consolidating nine related Seventh Circuit appeals and twenty D.C. Circuit Court appeals on November 9, 2020).

On November 19, FERC’s Office of Enforcement (OE) released its annual enforcement report, providing statistics on the investigative and enforcement activities conducted in the 2020 fiscal year by OE’s three divisions: Investigations, Audits and Accounting, and Analytics and Surveillance. OE eliminated its Energy Market Oversight division in September 2019, and FY 2020 was the first full fiscal year since that reorganization took place. The FY 2020 annual enforcement report is available here.

As shown in the chart below, FERC enforcement activity sharply decreased in FY 2020. 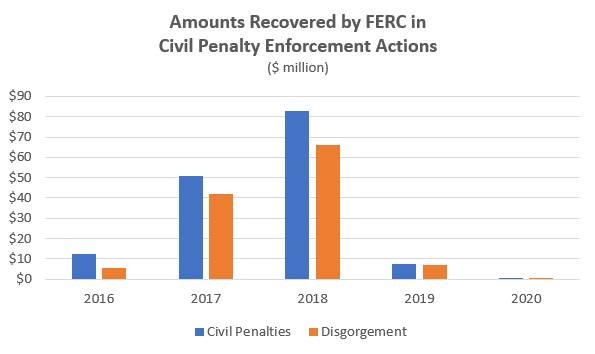 In FY 2020, FERC resolved three pending enforcement matters through settlements, imposing a total of $437,500 in civil penalties and $115,876 in disgorgement. Those dollar values stand in stark contrast to the $14.4 million and $149 million in penalties imposed by FERC in 2019 and 2018, respectively, as well as longer term trends in OE settlements; indeed, from 2007 through 2019, penalties and disgorgement paid through OE’s negotiated settlements averaged more than $100 million annually.

One data point held relatively steady from previous years, despite the overall dip in enforcement: the number of self-reports made by market participants. OE received 126 new self-reports in FY 2020. According to the enforcement report, the vast majority of self-reports involved minor violations, and many were closed with no action taken. The consistent use of self-reporting is perhaps not surprising given that FERC continues to strongly encourage companies to self-report and takes the view that doing so demonstrates a commitment to compliance. Self-reports can also result in credit that can significantly mitigate penalties.

Despite the dramatic decrease in certain enforcement activities in FY 2020, there are reasons to believe the decline will not continue in FY 2021. For one, OE provided a number of accommodations to regulated entities in light of the COVID-19 pandemic. The initiation of new audits was suspended for nearly one third of the year, from April through July, and self-reporting and other deadlines were extended. If the pandemic eases in 2021, OE may be less likely to offer flexibility to regulated entities, which could in turn lead to greater enforcement. Second, we expect to see an uptick in enforcement under a Biden administration. Regulated entities should prepare for OE to increase investigations into anticompetitive behavior and market manipulation in the energy sector.

FERC in a Biden Administration

As we noted in a previous alert, the Democratic presidential primary campaign saw some candidates support dramatic changes at FERC to steer the agency’s mission toward confronting climate change. President-elect Biden never endorsed such fundamental changes as a candidate for the Democratic nomination, nor is he expected to push for them as president. Nonetheless, President-elect Biden has a bold climate agenda, and FERC may be crucial to his chances for achieving some or all of his plans to address climate change.

Despite a 3-2 Republican majority at FERC for the first six months of his term, President-elect Biden may appoint the Chair, who may begin to influence the Commission’s agenda sooner than that. Key areas to watch are electricity transmission and natural gas pipelines. FERC has jurisdiction over the interstate transmission of electricity and transportation of natural gas. The extent of FERC’s authority to consider greenhouse gas emissions in its review of natural gas pipelines has been the subject of litigation, but there is room for FERC to place greater emphasis on those emissions. A more stringent environmental review for pipeline projects by FERC could affect pipeline project approvals over the next few years.

Meanwhile, the deployment of clean energy could increase if FERC prioritizes a more coordinated electricity transmission policy. Transmission is critical to connecting metropolitan areas to major areas of renewable energy generation. An increase in interregional transmission could accelerate the growth of the kind of large-scale solar and wind projects that will be needed to make progress toward the goal of carbon free electricity generation by 2035.

Although it is more insulated from political change as an independent regulatory agency, FERC will not be immune to the transition from President Trump to President-elect Biden. Regulated entities and stakeholders should watch developments closely, as the new administration is likely to bring an increase in enforcement of the energy sector and a change in key policy priorities.

WilmerHale’s Energy, Environment and Natural Resources Group will continue to carefully monitor the Commission and stands ready to assist clients from across the energy industry in these dynamic times.