June 1, 2020
Blog Focus on Audit Committees, Accounting and the Law

The Securities and Exchange Commission has adopted amendments to the disclosure requirements for business acquisitions and dispositions by a 3-to-1 vote (Commissioner Allison Herren Lee dissenting).  The amendments modernize the regulatory framework and alleviate some of the burdens faced by companies in assembling required financial statements with respect to acquisitions and dispositions.

Among the most significant changes in the amendments are modifications to the three significance tests set out in Rule 1-02(w) (and Securities Act Rule 405 and Exchange Act Rule 12b-2), which are referenced in a number of contexts, including business acquisitions and dispositions:

Critical to alleviating the burden on some registrants, the latest amendments also reduce the number of years of audited historical and unaudited interim financial statements that must be provided for acquired businesses under Rule 3-05.  Under the new rules, no more than the two most recent fiscal years are required regardless of significance, as summarized in the following chart: 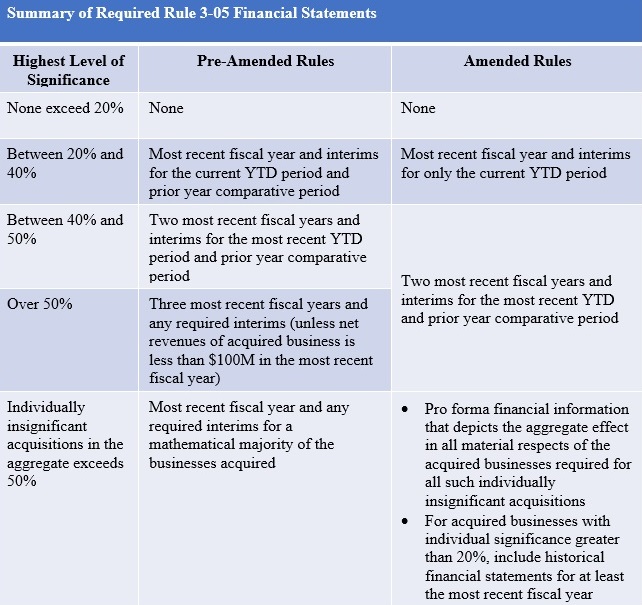 The amendments also include a number of other changes, some highlights of which include:

A premier corporate governance and disclosure practice providing timely, tailored and practical advice to public company clients based on in-depth experience and insight.