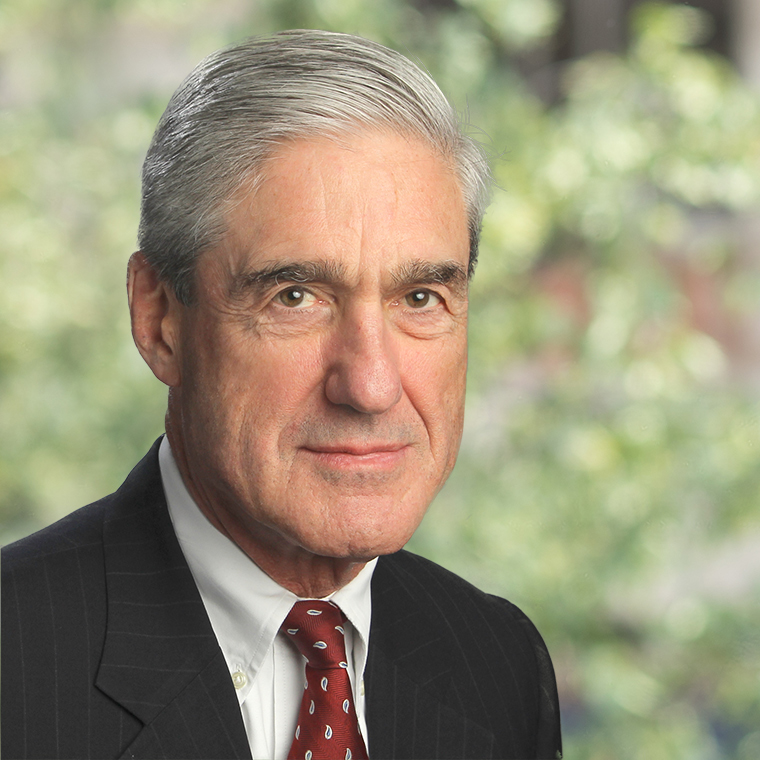 Robert S. Mueller III became the sixth Director of the Federal Bureau of Investigation (FBI) on September 4, 2001, one week before the attacks of September 11. He is widely credited for not only leading the FBI during an extremely challenging time, but also with transforming the Bureau from a traditional law enforcement agency to an intelligence-based national security organization. In 2017, Mr. Mueller was appointed Special Counsel by the US Deputy Attorney General to oversee the investigation of Russian government efforts to interfere in the 2016 presidential election and related matters.

In May 2011, as Mr. Mueller approached the end of his statutorily limited 10-year term at the FBI, President Obama asked him to remain in place for two additional years, and obtained special legislation from Congress to extend that term. At the time, Attorney General Holder stated: "The United States faces ongoing threats from terrorists intent on attacking us both at home and abroad, and it is crucial that the FBI have sustained, strong leadership to confront that threat. There is no better person for that job than Bob Mueller."

In his more than 37 years in the public sector, Mr. Mueller has served as a US Marine Corps officer (for his service, he was awarded the Bronze Star, two Navy Commendation Medals, the Purple Heart and the Vietnamese Cross of Gallantry); an Assistant US Attorney (AUSA) in three different offices; the US Attorney for the Northern District of California; the Assistant Attorney General in charge of the Department of Justice's (DOJ) Criminal Division; and the longest-serving Director of the FBI since J. Edgar Hoover.

Mr. Mueller began his career as a litigator in San Francisco, where he worked until 1976. He then served for 12 years in US Attorneys’ offices, first as the US Attorney for the Northern District of California, where he served as an AUSA and then as Chief of the Criminal Division. He then served as an AUSA in the District of Massachusetts, where he investigated and prosecuted major financial fraud, terrorism and public corruption cases, as well as narcotics conspiracies and international money launderers.

After moving to private practice as a partner at a Boston law firm, Mr. Mueller returned to public service in the late 1980s and early 1990s. He served in the DOJ, first as an assistant to Attorney General Richard L. Thornburgh, and then as Assistant Attorney General in charge of the Criminal Division, where he oversaw prosecutions including the conviction of Manuel Noriega and John Gotti, and the Lockerbie Pan Am Flight 103 case.

In one of his few breaks from government service, Mr. Mueller was a partner at Hale and Dorr from 1993–1995, where he focused on white-collar criminal litigation. He again returned to public service in 1995 as a senior litigator in the Homicide Section of the District of Columbia US Attorney's Office. In 1998, Mr. Mueller was named US Attorney in San Francisco, a position he held until 2001. He then served as Acting Deputy Attorney General of the DOJ for several months before becoming Director of the FBI.

Mr. Mueller was elected as a Fellow of the American College of Trial Lawyers in 1991.