Attorney General Sorrell, who has emerged as a national leader in state efforts to combat patent trolls, provided his singular insight into Vermont’s campaign to address what has become a “main street” problem—as PAEs have begun to target small businesses and nonprofits, not just large companies. Attendees from many of the firm’s key technology clients gathered in WilmerHale’s Washington DC, New York, Boston and Palo Alto offices for the telecast presentation, in which Attorney General Sorrell detailed the first-of-its-kind lawsuit he filed in May 2013 against a nationally known patent troll, alleging unfair and deceptive acts under Vermont’s Consumer Protection Act.

Vermont’s legal offensive against PAEs is being echoed in enforcement actions in Nebraska, New York and Minnesota, as state attorneys general band together in what has become a nationwide initiative. Attorney General Sorrell referenced the December 2013 letter signed by attorneys general from 42 states publicly supporting the US Federal Trade Commission’s proposed nationwide investigation of PAEs, as well as a letter to Congress signed by the same group just two days before the WilmerHale presentation, supporting federal patent reform efforts and noting the importance of state enforcement authority over unfair and deceptive demand letters.

WilmerHale Partners Ken Salazar and Cindy Vreeland—the leaders of WilmerHale’s new interdisciplinary Patent Troll Initiative—headed up the “patent troll” event. The working group brings together the firm’s IP litigation prowess and its strength in the government and regulatory arena to help clients address the challenges posed by PAEs to large companies and small businesses alike. 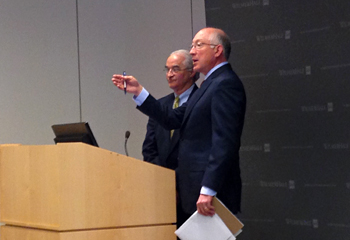