WilmerHale received the Team Advocacy Award from the Equal Justice Coalition (EJC) at the organization’s annual Walk to the Hill Captain’s Breakfast on January 9. The award honors the firm for visiting the most legislative offices during the EJC’s 2019 Walk to the Hill for Civil Legal Aid, an annual event that draws hundreds of legal professionals to the Massachusetts State House to advocate for legal aid funding.

Senior Associate Adam Cambier accepted the award on WilmerHale’s behalf at the breakfast, which took place in the firm’s Boston office. As he has for the past two years, Cambier will captain WilmerHale’s participation at this year’s Walk to the Hill on January 30. Partner Louis Tompros, who has chaired the EJC since 2016, also attended the breakfast and presented awards to three other firms, as well as UMass Law School, for their outstanding participation at last year’s walk.

“Lawyers and law students play a crucial role in fighting for legal aid funding for low-income families,” says Tompros. “But unfortunately, the majority of people seeking assistance still get turned away because of a lack of funding. And this funding is especially critical now, as people face an affordable housing crisis in many parts of the state and as immigration cases are surging.”

WilmerHale has a robust presence at the Walk to the Hill each year, sending dozens of firm members to gather at the State House and meet with lobbyists. This year’s attendees will advocate for $29 million in funding for the Massachusetts Legal Assistance Corporation, the commonwealth’s largest funding source for civil legal aid. 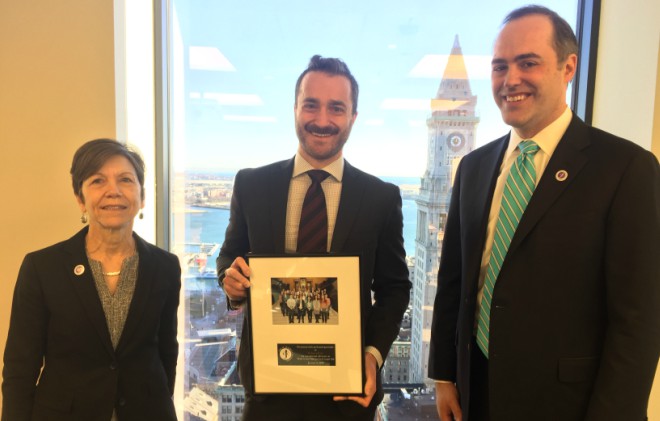